An American Company listed on the NYSE:
More at link:  FTI INFO
​Extract from their website 30 June 2019 below: 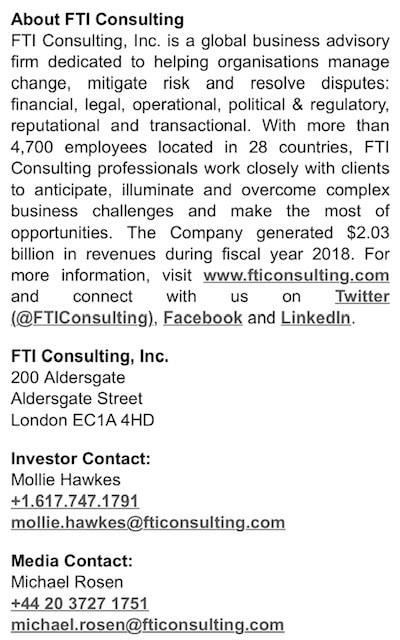 A rogue director of FTI Consulting destroyed my business:
Misconduct at FTI helped instigate the Australian Banking Royal Commission.
FTI Consulting say on their website that they are "a business advisory firm dedicated to helping organisations.... "
In my case they did the opposite. The person involved, Mark Englebert, has since left FTI and I am now requesting FTI Consulting's help to do the right thing and investigate this case and give full compensation for what happened:

FTI Consulting were appointed as receiver managers over my business by Bankwest, Australia, in 2011.
1) They refused me access to my companies books and accounts including profit and loss statements required to buy back or refinance the business.
2) Charged over $1.2m for their and their lawyers' fees to sell my two hotels.
3) Have since refused to release me information on how the fees were calculated or work done by their appointed lawyers acting on behalf of my companies which they charged my companies over $400,000 for. If they are an honest and reputable company, why are they doing this?
4) Caused a loss of sale on the Lighthouse Hotel by not releasing trading figures to an interested buyer and then telling him not to present a purchase offer (see ombudsman's page of this website). That cost me $4.5m.
5) Took over 18 weeks to put the National Hotel on the market. Downgraded its valuation from $7m to $1.5m. Took all my documents relating to that property and said they were getting a planning approval for a rooftop bar and calculating building costs. They charged my companies for this yet didn't do what they said they were doing. After 20 weeks and nothing happening, they then put the hotel on the market and sold it for about $3.5m. They were warned by the selling agents to get completion costs calculated but did not do this. If I had been given trading accounts for the Lighthouse Hotel and the other buyer was allowed to put an offer in to buy it (which they stopped!!) we could have sorted things out. I also had a buyer lined up to take a share of the National Hotel which would have prevented a fire sale.
6) Lied at a senate inquiry (See "sink boots into customer" page of this website). This is a serious offence: contempt of parliament, perjury and obstruction of justice and carries a potential jail term.
7) Told me not to talk to the media about their actions and threatened me with a restraining order if I talked to my staff or entered the premises of my own property, even though I had done nothing to warrant such an unreasonable threat.
8) Have to date refused all my efforts to meet and discuss or mediate on any of these issues.
9) It appears that under their management my profitable company, Butler Constructions, was destroyed. They took in fees all the earnings and it was destroyed, it had retained profits when they commenced and was profitable. They left it with huge losses and it became worthless and wasn't even sold!
10) Upon the receipt of an Ombudsman's case appraisal of just item 1&4 above, which indicates FTI Consulting may have broken multiple sections of Australian Corporations Law and that I may have a damages claim, have at last (28 June 2019) after many years agreed to a dispute resolution process.
11) The damages as a result of dishonesty here are in the vicinity of $26m plus any punitive damages awarded. If FTI Consulting had acted in the interests of my companies, I could have retained a 50% ownership in both Hotels as I had buyers ready to take out the other shareholder. Bankwest would have had any issues sorted as the company was profitable and could have paid all interest. As well as this I had to sell a farm and our family home.

I request FTI to discuss this with me and to investigate these matters. I request that damages are properly calculated and that I am fully compensated for what was done including lost earnings over the time this has gone on.

I was since this happened employed as an adviser to Senators at Parliament House Canberra, Australia. I used details of this case, and especially the Taylor Woodings (Now FTI Consulting) "sink boots into customer" memo, (see another page of this website) to get politicians to agree to the Australian Banking Royal Commission.

I will now if not resolved use this case as an example to get a Government inquiry into misconduct by Bank appointed receiver managers like FTI Consulting. If this case isn't resolved and the regulators further investigate it will do immense damage to the reputation of FTI in Australia.

Senior Australian directors have been made aware of this case.
To directors of FTI Consulting:
Adverse publicity from this case will damage to your brand in Australia costing you far more than any settlement cost of this case. Just see what happened to AMP and Challenger Financial.
Those responsible for this misconduct appear to have left FTI and Bankwest so now please do the right thing and compensate me for what they did as Bankwest and FTI were the offending companies. Failure to do so and a continued cover up could destroy your reputation here.
Please send this website to your insurers.