​Attempts to stop an inquiry into dishonesty, fraud and an ongoing coverup at Bankwest:
In 2012 I took the matter to the Financial Ombudsman Service (FOS).
They did not investigate because the Bankwest appointed receiver managers Taylor Woodings / FTI Consulting would not give FOS an authority to investigate their conduct!
They did not want their fraudulent behavior exposed:

​In 2017 I again took the matter to FOS.
Bankwest could have waived any jurisdictional limits to allow an inquiry but advised FOS that it was not prepared to so which prevented any investigation into their actions.
Bankwest clearly didn’t want their conduct investigated. 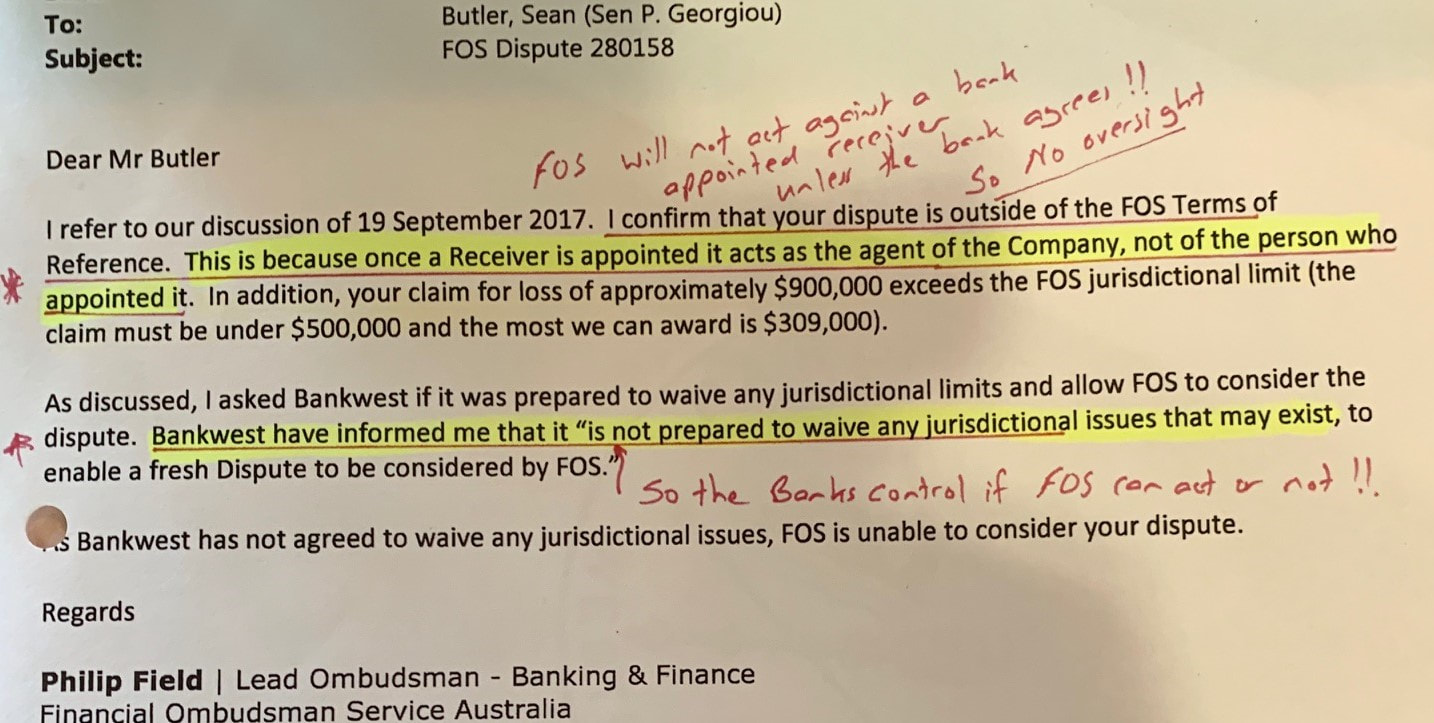 ​As a result of ongoing Banking scandals, the Government set up the Australian Small Business and Family Enterprise Ombudsman (ASBFEO).
In 2016 I took my matter to the ASBFEO. It took them two years to instigate a formal case appraisal in 2018. The case appraisal was released to me in May 2019.
The case appraisal concluded that in their opinion and based on the evidence provided by both myself and FTI Consulting that there had been breaches of multiple sections of Corporations Law and serious deliberate misconduct by Bankwest’s receivers.

​Full details of the case appraisal at:
https://www.fticonsulting-info.com/ombudsmans-report-misconduct.html
The ASBFEO then requested FTI Consulting attend a case conciliation meeting.
FTI Consulting refused. Apparently, this is the first time ever that the Ombudsman had been refused such a request. The Ombudsman then advised FTI it would publish the refusal unless they attended. On this threat FTI agreed to attend the conciliation but before doing so issued a letter saying that they had no liability for any misconduct because the claim is statute barred:

​FTI also wrote to me putting me on notice not to disclose the case appraisal to the media:

​On 30 September 2109 the case conciliation meeting was held in Melbourne attended by myself, John Park the Senior Managing Director of FTI Consulting Australia, Maria Duta FTI Counsel and Senator Pauline Hanson’s Senior adviser Lawyer Don Bundesen. Maria Duta is an ex ASIC employee and understands the seriousness of what FTI Consulting had done.
John Park offered me $50,000 if I agreed to keep quiet about the case and not to distribute the case appraisal. I rejected this offer but requested an open and honest inquiry into my case with the findings referred to the Government for action. My request was rejected by John Park.
I then told the ASBFEO what had happened and requested that they conduct a formal inquiry into the conduct of Bank appointed receiver managers as they now have a documented case with an independent report showing serious misconduct.
On 10 October the ASBFEO announced that it would hold an “Insolvency Practices Inquiry” led by ex-Nationals Senator John Williams. https://www.asbfeo.gov.au/inquiries/insolvency-practices
They have asked if they can use my case as a case example in the final report and I have agreed to this. The inquiry is due to report to the Government on 18 February 2020.

From the Ombudsman December 2019: "To date more than 300 small businesses have contributed their stories. The overwhelming experience of small businesses has been a loss of control, costs that strip the value of the business and a lack of transparency throughout the process."
​
On 23 October 2019 Senator Pauline Hanson questioned the Business Ombudsman, Kate Carnell, on this matter at Senate Estimates, Parliament House Canberra: 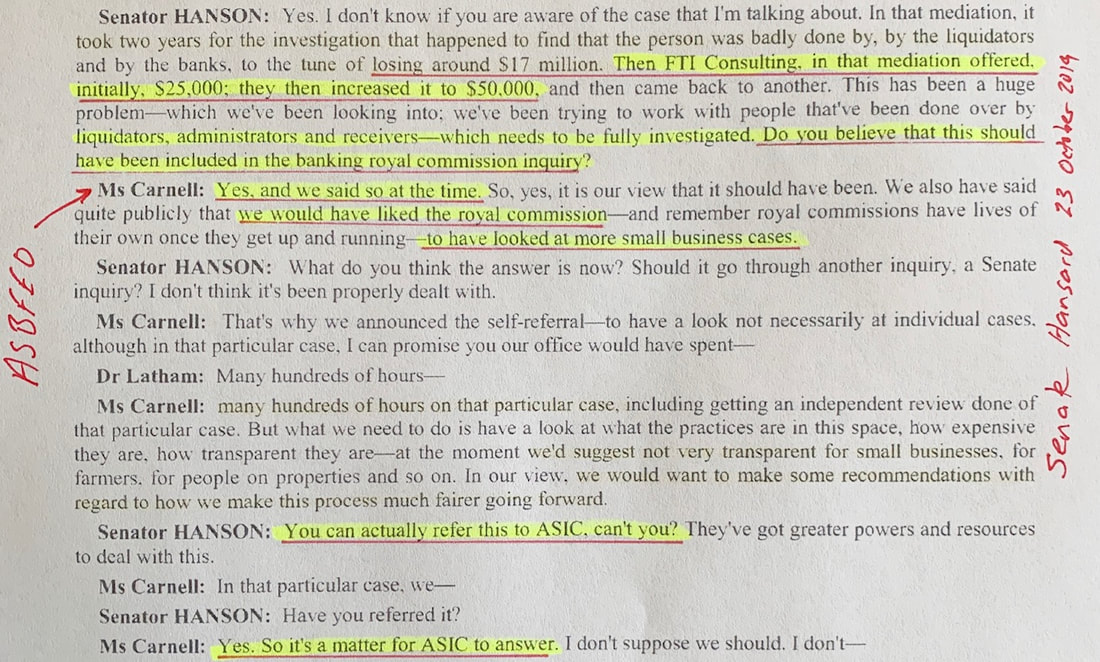 ​20 November ASIC, Escalated Matters & Government Assessment & Intelligence contacted me to advise they are now investigating this matter. They have since advised me they have the ASBFEO case appraisal and that the matter will be investigated by specialist team within ASIC over the next four months.

From: sbutler@iinet.net.au <sbutler@iinet.net.au>
Sent: Monday, 11 November 2019 3:17 PM
To: 'Knight, Anne' <Anne.Knight@cba.com.au>
Subject: My Business did not fail. Please investigate.
Dear Anne
You advised me 8th November that the Commonwealth Bank will take no action on my case because my business failed. My business did not fail. Profits were at record levels just before Bankwest appointed dishonest receiver managers FTI Consulting.
They charged me over $1.3m to sell my properties and Bankwest then increased their interest rates from 7% to over 18%. No Business could withstand that.
FTI Consulting rejected offers to buy the properties at higher prices and refused to release to me or other interested parties trading accounts on my business that would have assisted with refinancing or a sale. FTI is an American multinational company gouging and destroying Australian Businesses and is still at it.
Bankwest refused to allow progressive sales of properties to reduce debt and then demanded that all debt be repaid in one lump sum, a near impossible request. We had four separate properties including two houses that could have been sold separately but Bankwest prevented these sales!
Bankwest knew we were capable of meeting interest payments going forward and offered to continue funding if we signed a Deed of Forbearance. Every adviser we spoke to advised us the Deed was extremely unfair and unconscionable. It included a $200,000 fee and clauses that would have prevented us ever seeking legal fairness and total confidentiality. Nazi Germany sort of stuff and not something Australia’s largest Bank should be involved with.
My old business, The Lighthouse Beach Resort, is now owned and run by the Banker involved responsible for the receivership, Brian Benari, the now disgraced ex CEO of Challenger Financial. The business involved was, and still is very profitable and never failed.
All this is in information I have sent you previously with documents to support on the websites provided at https://www.bankwestinfo.com/
You now have an Ombudsman’s report mentioning multiple breaches of Corporations Law by FTI Consulting. Bankwest senior managers worked in collusion with these criminal thugs even issuing an instruction for them to “Sink Boots into Customer” and they then went on to lie at a Senate Inquiry to avoid further investigation. Bankwest and the receivers even went so far as to prevent investigations by the Financial Ombudsman Service (FOS). Finally, in the wake of the Banking Royal Commission the new Ombudsman has partially exposed what went on, yet you still refuse to acknowledge it.
If Bankwest reckon they have nothing to hide, then will you release to me all the work done on my behalf which I was charged $1.35m for. To date you have refused this request, but I ask you again. This is the sort of conduct that brought on the Banking Royal Commission and the Banks now have a compensation bill of over $10 BILLION for past dishonesty.  I request a full open and honest review of this case and compensation for what was done.
Please forward this email and attachments to the CEO of the Commonwealth Bank, Matt Comyn, and the new CEO of Bank West Sinead Taylor.
But Anne advised me they would not follow up on my requests for an investigation: 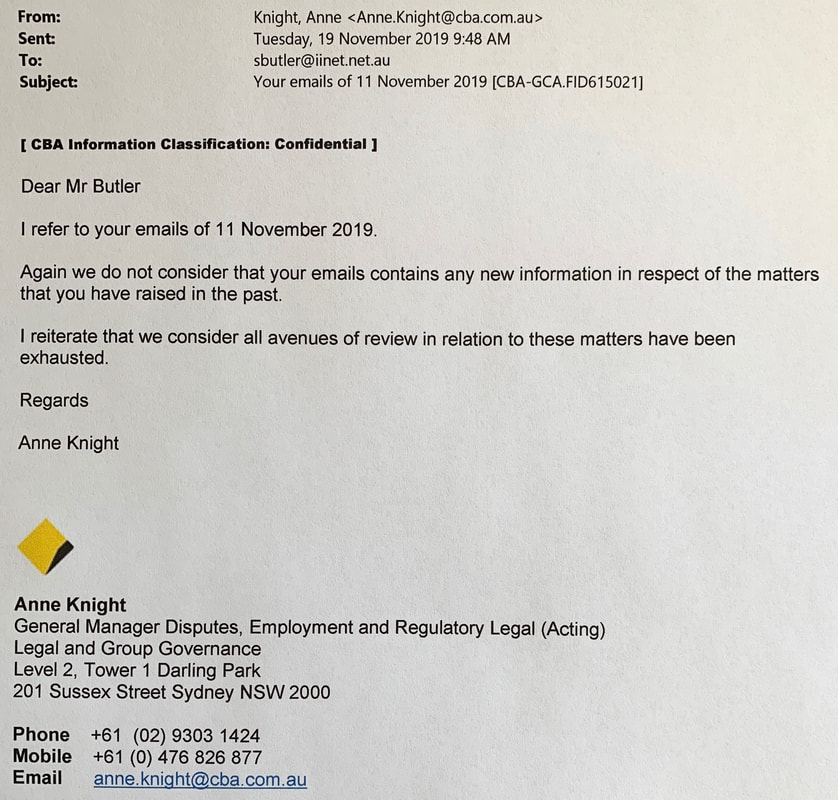 ​6 December I took documents on my case directly to the Bankwest Fremantle Branch and left them with David Moog, Assistant Relationship Manager and followed up with emails and further information to senior management at that Branch detailing my concerns and requesting that the matter be directly referred to Sinead Taylor, the new CEO of Bankwest.
I then received an email from Bankwest’s head office in Perth saying that they are now investigating the matter. It appears from the “Hi Paul” that the email was sent to me in error but I now have evidence they are investigating: 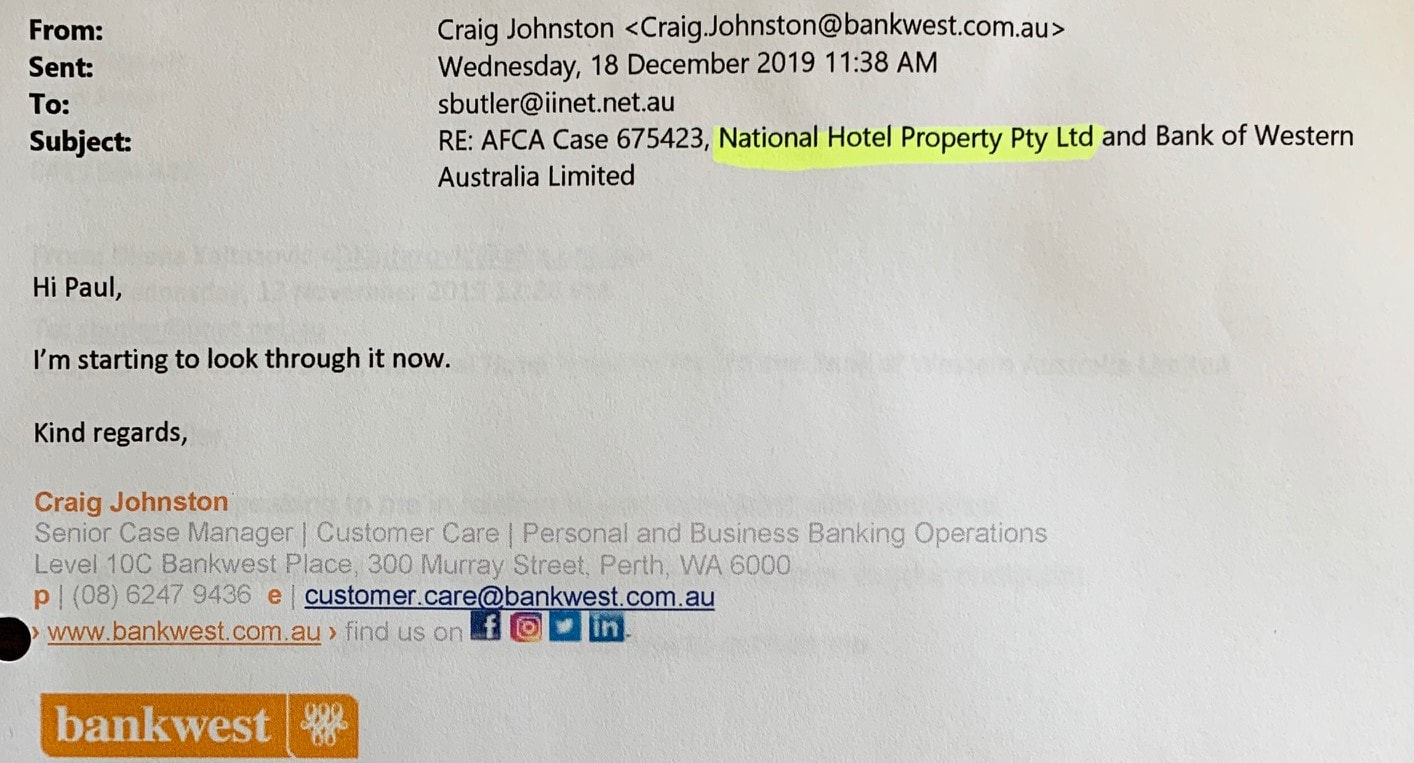 ​I have responded to this email from Bankwest’s Craig Johnston sending the Ombudsman’s report and other proof of serous misconduct and I have asked for an independent investigation with a report released to me. When the matter is raised in the Senate again, I will refer to Craig Johnston as he has a duty to report any dishonest conduct and would be in serious trouble if he doesn’t as has been shown with others during the Banking Royal Commission.

In Summary there are now three investigations on foot:This case involves serious misconduct that is well documented with indisputable evidence and other information posted on the website at https://www.bankwestinfo.com/my-story.html And;
It also involves proof that Bankwest senior managers and their appointed receiver / managers provided deliberately misleading and deceptive information to a Senate inquiry in 2012. Documented at: https://www.fticonsulting-info.com/fti-lies-to-senate.html
This is the case with the memo instruction from Bankwest’s head of Government and Legal Affairs to “Sink Boots into Customer.” https://www.bankwestinfo.com/sink-boots-into-customer.html
This is the case that was used at Parliament House to convince key politicians to have the Banking Royal Commission in 2017.
This case is now finally under investigation by ASIC, the Ombudsman and by Bankwest.
I request that these investigations are independent and thorough and that the findings are released in full to me and to the Government.
My case is one of just hundreds involving similar misconduct by a small group of managers at Bankwest and their appointed receiver managers. If Bankwest have nothing to hide, they should allow full disclosure of their actions.
Bankwest, FTI Consulting Bankwest ASIC